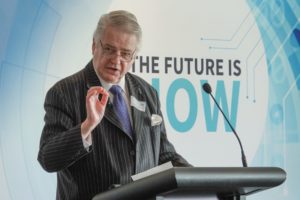 Is President Trump about to embark on his first war? He was elected with the promise to get out of the wars involving his predecessors Bush and Obama: Afghanistan, Iraq and Syria. He is making some progress.

But Venezuela threatens his “isolationist” foreign policy. He wants to withdraw from some of the US’s foreign entanglements (advice first proved by the US’s first president George Washington, the 1796 founder of “isolationism”).

But Trump is being drawn into the biggest crisis in Latin America.

Venezuela has the world’s largest oil reserves and was once the richest country in Latin America. It is a tragic example of how a wealthy country can slide into bankruptcy and chaos.

Hugo Chavez (1954-2013) was elected president in 1998 and began an ambitious programme of economic and social reform to assist the country’s poor people. He was inspired by the Cuban model of economic development. Oil prices were high and so there was money for this programme. Chavez died in office in 2013 and was replaced by Nicolas Maduro, who continued his policies.

As long as oil prices were high, progress could be made. The government spent 50 per cent of GNP on reducing unemployment, creation of worker-owned co-operatives and the nationalization of many industries. It tried to show there was an alternative to free market capitalism.

But from 2014 there has been a reduction in oil prices. The country has been slowly sliding into chaos. About 3 million people (almost 10 per cent of the population) have fled the country.

President Washington’s doctrine of “isolationism” (trading with countries rather than fighting them) was complemented by President James Monroe’s 1823 doctrine of keeping European countries out of Latin America. Once the Spanish and Portuguese colonies became independent, the US wanted to exclude further foreign intervention. Latin America became America’s backyard: “the Monroe doctrine”.

This tradition is now being eroded. Cuba, a playground for rich Americans and the mafia, rebelled against US influence in 1959 and Fidel Castro (1926-2016) became the new leader. He developed close ties with the Soviet Union.

The US has been hostile to Cuba since 1959 but has failed to remove the communist leadership. It is one of the US’s longest running foreign policy failures. Not even Australia agrees with the way in which the US treats Cuba.

The US has feared that the Cuban model would become attractive to other Latin American countries. Generally speaking the Cuban model has not caught on. Military dictatorship and capitalism have stood their ground, with democracy gradually taking hold, albeit with a large gap between rich and poor.

John Bolton, President’s Trump’s national security adviser, now refers to the “troika of tyranny”: Cuba, Nicaragua and Venezuela. The US has trade sanctions against all three of them.

Three out of about 20 Latin American countries hardly represent a flood of communism. But the US is nervous that other countries could still follow suit.

Meanwhile Russia and China are now both siding with the Maduro government. Both have invested heavily in the country – and so ignored the US’s economic sanctions. Maduro is also supported by Turkey and Iran.

Therefore there are larger issues involved than the daily tragedy of trying to survive in Venezuela.

China has a vision of becoming the global super power in 2049 (100th anniversary of the Chinese communist revolution). Its manoeuvring over Venezuela is part of the global power politics chess game.

Trump has a dilemma. Countries are looking to the US – as per the Monroe doctrine – to sort out Venezuela. Getting rid of Maduro would be a step in the right direction (such as by encouraging him to retire to Cuba). But the next leader will still have immense economic problems to sort out.

What happens if Maduro refuses to leave? Will the US attempt “regime change”. Previous attempts (as in Iraq) have ended badly. The US does not have a good record.

But if Trump decides to leave Venezuela to sort itself out, then the US will be seen as no longer the sole dominant player in Latin America. It may embolden China and Russia to get further involved in Latin America. The “Monroe doctrine” will be eroded.

Trump had a comparatively easy first two years in office, with no major foreign policy crisis. His final two years will not be so easy.